Posted on October 14, 2011 by imagesbytdashfield

Walking away from  the world of Coke with our intrepid 7 year old  sloshing from all the pop he had gulped down, we saw two play grounds in the park across the street.  Centennial Park has two play areas, one for the wee tykes and one for the slightly older crowd. This one was for the littler guys. I turn him loose.  Go! Run free and work off some of that sugar while we sit over here and watch.

There were monkey bars which were so low that 7 could just walk up and hang onto them.  Didn’t stop him from turning upside down and swinging across anyway.  Not as far for him to fall I figured.  Mentioning falling, the entire area was “carpeted” with this spongy material that looked like pebbles but wasn’t.  All three of us started poking things to see what would give and what wouldn’t.  If a child fell the assumption was that they wouldn’t be that terribly injured.  DH starts in with his “when I was a kid we had dirt and rocks….” routine. Yes, honey.  But I have a few scars from playing in areas as a child that would now send parents into conniptions over total lack of safety.

Our little guy was having a grand time climbing and jumping about when we saw these funny looking stools (the only word I can think of for them) and tried to figure out what they were good for.  It was a pole holding up what looked like a warped bicycle seat and everything was at an angle.  He gets on and we find out what the heck they do – they spin you around erratically until you either fall off or get off and then stagger away giggling because your body is going one way but your brain is doing the wobble the other.

He gave me a look with his big baby browns and asked me to do it with him.  The things we do for our little ones.  But it was fun and NO you are not going to see those pictures.  We both twirled around until I couldn’t take any more and I had to stop, stand still, and wait for brain and body to be in the same dimension.   I confess that I was egging him on some at the spinning things.  “Spin till you throw up!” I said.  That led to his making all of these obnoxious retching noises – fortunately he didn’t hurl.  More tykes were coming in to play so we moved to the other play area.  It was more his speed including a sliding monkey bar that he spent most of his time on.

Now I don’t understand why children love to spin around until they are dizzy and I understand even less why when they are playing or chasing one another they have to scream so much.  I suppose it is their way of expressing unadulterated joy that we as adults have since suppressed in order to conform to the expectations placed upon us.  DH was quick to point out that it was the girls who were screaming.  I gave him a look and told him the boys were busy doing their things quietly because in all probability if they made enough noise it that would get their mother’s attention resulting in their screaming.  Watching kids play and have fun is a joy to behold.

The 7 year old was having a blast when I told him it was time to go get something to eat.  He  trudged behind us saying he was too tired to walk – yeah, right – when we saw these dancing fountains and I knew there was going to be a “because I said so” moment coming on.  The weather was warm but not warm enough for 7 to get soaking wet and especially not in his good play clothes.  There were three boys in shorts and t shirts running in and out of the sprays of water;  7  looked up at me pleading could he get in.  “Not happening!” I said firmly.  He stood there staring longingly at the other boys having way more fun than he was (I just knew this was what he was thinking) and putting on his best poor pitiful me look.  “It’s time to eat and you get to pick where we go” I said.  That got his attention away from wanting to get sopping wet.  Sure it was a bit of a bribe but sometimes you just have to do what you have to do.

He bounced ahead of us happily – when he wasn’t trying to climb all over DH – as we wondered when was he ever going to wear down.  Occasionally he would point out a bush, a rock , or bring me a leaf and ask me if I wanted it or if I wanted to take a picture of it as he had seen me stop and take pictures of those things.  Bless his sweet little heart!  At lunch we watched him put away a pizza and commented that he must have a hollow leg.  Then we had to explain what that meant as he looked down at his legs.

Love you to pieces, 7 year old.

I don’t care what those other boys are doing, 7, you are not going to get into that water! 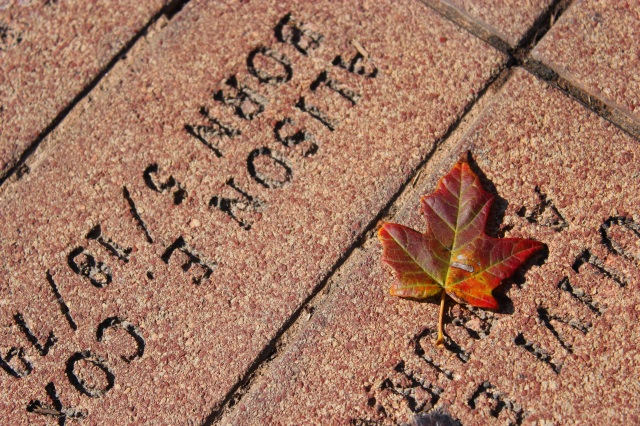 It was interesting reading the memorial bricks in the park; who they were from/to and where they came from.

8 Responses to Run off that soda pop, 7! (final chapter)