Posted on April 26, 2012 by imagesbytdashfield

There is a great deal of truth in the adage get out there and explore your new surroundings.  We’ve lived in our new area just about a year and a half now and in that time I have discovered some very interesting things.  Places to eat, things to eat, blueberry farms, organic farms, killer parks, wineries, and friendly and informative people.  It was while walking around in my favorite huge park here that a kind gentleman offered me the use of his binoculars in order to see the eagles in their nest (future post maybe).  Turns out the guy was an avid bird watcher and as we walked back down the long and winding path out of nature and back to the parking lot, he was giving me a lesson on fauna and flora.

He apologized for being chatty and perhaps disturbing some of the animal life I was trying to take pictures of but I assured him his wealth of knowledge was appreciated.  That day I learned about types of woodpeckers in the park, other flowers, and about this one plant which until I walked in this park I had never seen nor heard of before in my life – the Mayapple.  He told me that due to the very mild winter they had come up and were on the verge of blooming much earlier than usual.  Well, that pretty much stood for almost every plant around but back to the Mayapple.  He left the path to walk into the field a bit to lift up a leaf to show me where the little plant would eventually put out it’s little bloom.  Who knew!

We were both chuckling about how the plant looked like some designers take on a patio or beach umbrella and that it just called out for pixies, fairies, or some other little mythical woodland creatures to be hanging out under them.  They really do look like if you were to look out of the corner of your eye you would see something kicking back under the leaves having a nap or a cuppa.  Some of them were growing in small bunches while there was one large open area of the park that had these big clumps of them growing in the midst of the grass.  Little Mayapple cities for the fairy folk.  It was nice having my own nature guide as we walked along and just as we were near the parking lot, there it was!  A Mayapple plant with it’s one single little flower.  If I had not bumped into my bird watching friend I would never have known of this plant and surely would never had noticed this pretty little bloom. 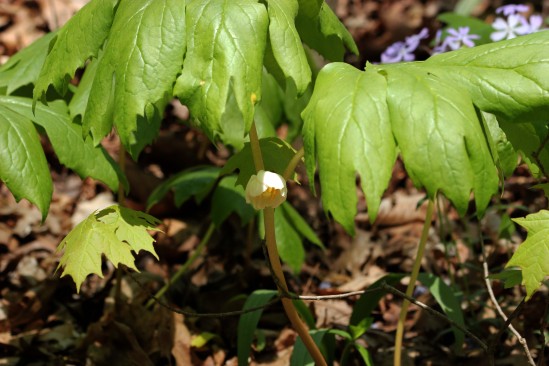 9 Responses to Mayapples in April