Posted on August 8, 2013 by imagesbytdashfield

When you finally pull yourself away from all that is the public garden, you cross the street and end up in Boston Common – the oldest city park in the United States; founded 1634.  I’ll share more about the Common in the next post.  Right now I want to show you this beautiful carousel.  I could’ve stayed there for the longest trying to capture each of the animals on there.   According to www.bostoncentral.com  : Built in 1947 by the Allan Herschell Company of North Tonawanda, NY. The Allan Herschell Company, the most prolific maker of carousels, specialized in producing portable machines which could be used by traveling carnival operators. The Company produced over 3,000 hand carved wooden carousels and out-produced all of its rivals in the carousel industry.  Tickets are $3.00 each with no charge for one adult standing next to the child.  It is open from mid-April to the end of October.

The little girl in me wanted to go for a ride so much but I had to be an adult (phooey!) and be content with just photographing it.  The carousel had beautifully decorated horses as well as a zebra, a cat with a fish in it’s mouth, a goat, a rabbit, a deer, a rooster, and what looked like a chariot.

By the way…is there a difference between a carousel and a merry-go-round or is it just semantics? 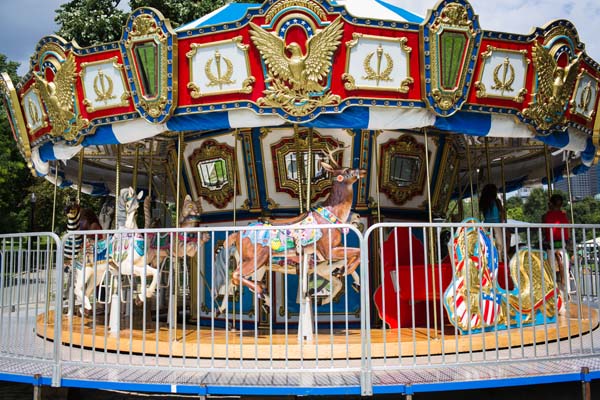 Fine art photographer who loves to see and capture the amazing things in this world. Owner of Images by TDashfield photography. www.imagesbytdashfield.com
View all posts by imagesbytdashfield →
This entry was posted in architecture, fun, History, photography, travel and tagged Boston, Boston Common, carousel, photography, photos, travel. Bookmark the permalink.