Posted on August 10, 2013 by imagesbytdashfield

Everywhere we went there was music playing be it muzak in the malls, someones impossibly loud car sound system, or entertainment in the parks and subways.  DH told me that these musical people couldn’t just park themselves anywhere, they had to have permits and that most if not the majority of them were professional musicians or well on their way to pro status; we did walk past the Berklee College of Music a few times.  We were treated to the sounds of many interesting musicians (wish I had photographed the guys playing the didgeridoos – Yes, there were two guys playing didgeridoos!) and marveled at all of the wonderful talent.

The guy in the subway (the red line to be exact) on our way to Cambridge was playing Procol Harum’s Whiter Shade of Pale.  I started singing along softly while waiting for our train.  When I went to drop some money in his guitar case I noticed that it only had a few coins in it but after I walked away I guess maybe I broke the ice because others started dropping some dollars in and one even bought a CD of his he was selling.  Nothing like appreciating the classics while waiting for your train. 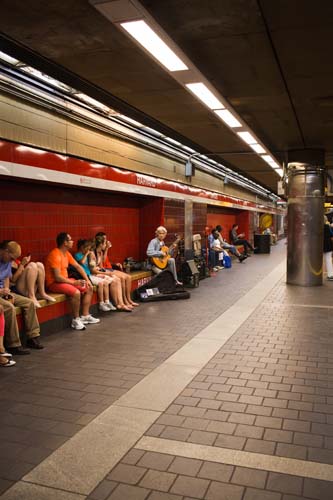 Now this guy in Boston Garden? What a hoot!! This is Rambin’ Dan and the Professor World Band who has been generating peace waves in over thirty five countries for the last twenty five years.  (Hey! That came from his card that I took, you can’t make up this stuff!)  When we saw him he was playing something by Bob Dylan that the little guy in the first picture enjoyed grooving along with him.  Rock on, Dan, rock on. 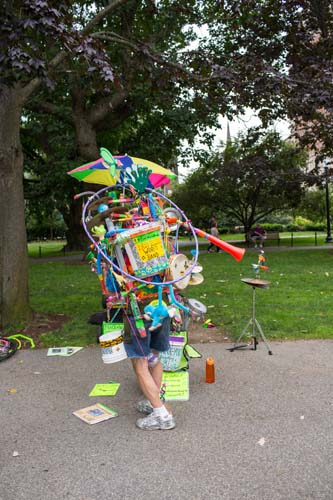