Posted on June 26, 2014 by imagesbytdashfield

When attending a comic con you will find many different genres of characters: Steampunk, comic book characters, movie characters, popular television characters, original concepts, sci-fi, video games, anime and more.  A lot of these can and do crossover such as a character that started out as a comic but is now known more as a television or movie character.

Here we have some examples of cosplayers coming as characters from video games (a couple of these games have also been made into movies).  Hmmmmm someone looks rather familiar in one of these photos 😉 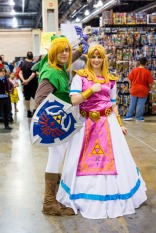 Legend of Zelda – Link and Zelda