Posted on August 5, 2016 by imagesbytdashfield

This year I went back to my roots (blonde ones at that) of cosplay characters; from being nice last year to back to being a psychopath.  I’ve cosplayed Harley Quinn from the DC Comics universe before but this year I played her as a character that will be making her movie debut today.  The bonkers evil characters get to have more fun in my opinion.  For example, before the photo of me with Batman here, I tiptoed up behind him and threatened to whack him in the head with my bat.

Everyone watching had a good laugh but for Bats who, when he finally got a clue that I was behind him and turned around, stared at first and then smiled when I said “Hiya, Bats!” in my best imitation of the cartoon version of Harley Quinn.  In paying attention to detail, I put most of the movie characters tattoos on my legs, stomach and arm.  They are not real (well the two above my left ankle and one on my wrist are) but they are still being scrubbed off as of today.  Go hard or go home I say!

There were a few celebrities at the convention this year but none I wanted to meet more than Nichelle Nichols, aka. the first Nyota Uhura from the original Star Trek series.  It was an honor to meet and share a private joke with her about one of her infamous episodes 🙂 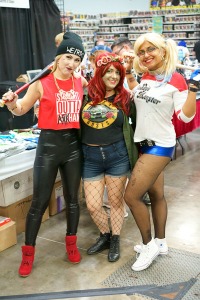 20 Responses to Harley Quinn Suicide Squad and Meeting my Hero