Posted on June 18, 2017 by imagesbytdashfield

On our road trip we came across the Hoover Mudflats boardwalk in Galena, Ohio where we stopped to explore.  It apparently is a popular fishing spot as we saw several people coming and going laden with chairs, rods and bait.  While there were others there fishing, this little guy – who was torn between just playing with the hook-less rubbery lures or picking up every pole that was set out – caught my attention.

His father, the gentleman in the chair, was there to introduce the little two year old and his older brother to the joys of fishing along with their uncle.  I stopped and spoke with him about the usual things like what can you catch in here, what bait are you using, etc.  This fishing foray was part of his Father’s Day present; a steak dinner was going to be the other part on Father’s Day.  I told him how I still had fond memories of my father taking me fishing and how I enjoyed it until I became a teenager and wanted no part of it even though one of my chores was to clean and cut up any fish caught and brought home.  I became quite skilled at getting that chore over and done with as quickly as possible!

We traded fishing tales laughing about how messy scaling and gutting fish can get and compared notes on how to filet a fish.  He told me that on YouTube there is a tutorial on how to filet a fish in 30 seconds.  Who knew!  His older son caught a sunfish while I was still there and I got to see a skill being passed down, how to grip and unhook a fish.  He was a bit nervous about doing it but with his uncles help managed to do the catch and release.  I gave him a high five for it.

This brought back memories of being a little girl and staring at that floating red and white fishing bobber waiting for it to wiggle while my father sat in the shade watching me at the lake in the park.  I was so proud when I caught a fish and showed it to him even if that fish was all of 4 inches long.  Back then he had to unhook the fish, I hadn’t quite developed that skill yet.  I have a lot of memories of my father; most very good and a few not so good as in getting busted for coming in late from a dance and of course when he became ill and I had to assume the parental role.  But at this moment the memories of my father were all wonderful and it was beautiful to see another father and child making their memories.

Happy Father’s Day.  May it be a good one for and to you.

This is a Gar fish.  Most fishermen do not like them as their presence scares off the fish they want to catch.  They have a mouth full of very sharp teeth and unlike the sturgeon they resemble, their eggs are toxic to humans.  Nasty buggers! 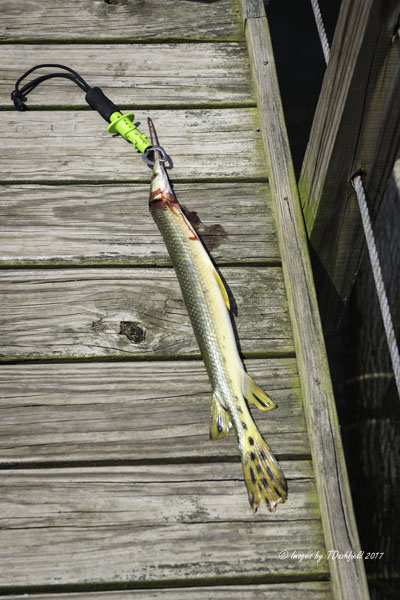 11 Responses to Fishing for Father’s Day