Posted on September 8, 2017 by imagesbytdashfield

According to Wikipedia:  Dragon Con (previously Dragon*Con and sometimes DragonCon) is a North America multigenre convention, founded in 1987, which takes place annually over the Labor Day weekend in Atlanta, Georgia. As of 2016, the convention draws attendance of over 77,000,[1] features hundreds of guests, encompasses five hotels in the Peachtree Center neighborhood of downtown Atlanta near Centennial Olympic Park, and runs thousands of hours of programming for fans of science fiction, fantasy, comic books, and other elements of fan culture. It is operated by a private for-profit corporation, with the help of a 1,500-member volunteer staff. Dragon Con has hosted the 1990 Origins Game Fair and the 1995 North American Science Fiction Convention (NASFiC).[3]

Dragoncon, unlike some conventions with set hours each day, seemed to be pretty much 24hrs a day at all five of the host hotels.  There was always something to do be it see a celebrity panel, watch robots battle, learn how to make your own foam armor, play games, go to themed dances and more.  Of course part of that ‘more’ included thousands of people dressed as their favorite anime, cartoon, television, movie, and so forth character.  The big highlight of Dragoncon – which brings in attendees as well as locals – is the parade which shuts down a big part of downtown Atlanta as people line up along the streets, parking garages and anywhere else they can find to get a good view.

The parade starts at 10am but many had staked their claim along the parade route since before dawn; get there early or be prepared to stand behind a lot of people.  Fortunately I found a spot and wriggled my way to a place on the curb which was ideal for capturing all of the groups that were part of the parade.  As previously described, Dragoncon is a multi-genre convention and so is the parade.  Everyone cheered and waved at their favorite group and yelled for them to come closer for a picture.  The parade participants were especially nice to the children there; those little faces beamed when Spiderman or a Disney character would walk over to them and give them a high five.

The arrival of the dragons signified the beginning of the parade and as the saying goes, the crowd went wild! 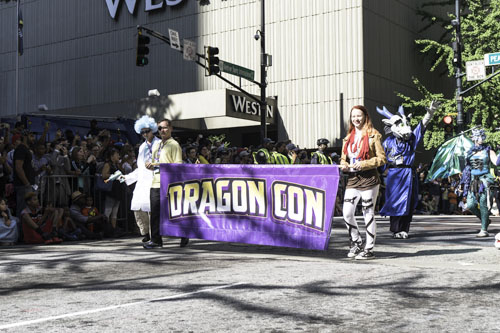 The Grand Marshall and more from the parade next…