Posted on October 13, 2017 by imagesbytdashfield

What do I mean by what can happen on a photo safari?  Well, many things great and frustrating.  The day you go on safari the weather could be terrible (very hot or very wet) or in the case of my day it was very chilly, dry and dusty.  All of those conditions mean bad things can happen to your gear if you aren’t prepared with either a rain hood or sealed equipment.  Either way, after the safari it is important to check out and clean your equipment.

To tripod/monopod or hand held?  I did not bring either and by the end of the 3.5 hour tour my shoulders were aching from holding my camera and 70-200 lens.  Those who brought the extra support elected to use monopods which was a good thing as it made it easier to use and steady cameras with long lenses on the bus but many many times people were bumped by others equipment because of the close proximity.   Backpacks, belt systems and vests were also in use to carry all of the equipment and there was quite a bit on that tour bus which leads me into a particularly important piece of equipment for this or any shoot – the lens.

You never know how close or far your subject may be on safari.  They could be yards away or stick their heads right into the bus.  So what can you do?  You can elect to have a lens that will really get the face of your subject that is far away such as this Sigma 150-600 sports lens that Sigma loaned to those who wanted to use it in our group (if you added a teleconverter to that you could really capture the eyelashes of that rhino up on the hill), use a smaller zoom lens like the 70-200 I own (with our without a teleconverter), take your chances by changing lens while on the tour or have two camera bodies with different lens ranges.  It depends on what you want to capture and how much you want to carry.

As long as you are photographing animals out in the open all is well but what happens when, as we did, you stop at areas where the animals are fenced in?  Now you have a different shooting obstacle to overcome.  You can “remove” the fence in post editing but that takes a lot of time and effort or you can try this.  Get right up on the fence (providing it is allowed and safe to) focus on your subject and use as wide an aperture as your camera allows; plus or minus a few stops.  Try a couple of test shots first to see what works best for you.  The fence should pretty much go away then.  In this first photo of the beautiful African Painted dogs my first efforts to remove the fence in my images were fails.  There was a big gap between where I was allowed to stand and their fence plus the dogs were a bouncy playful group.  Sometimes a fail is still a nice image though.

I fared better with the second shot as the dog was relaxing in the grass which gave me the chance to quickly work at my settings to get the shot.  Even if there is a fence to deal with, walk around to see if there is a better angle for the shot or maybe even a walkway or bridge that goes above the fencing.  Of course you may have to work around everyone else who also found that sweet spot but it will be worth it. 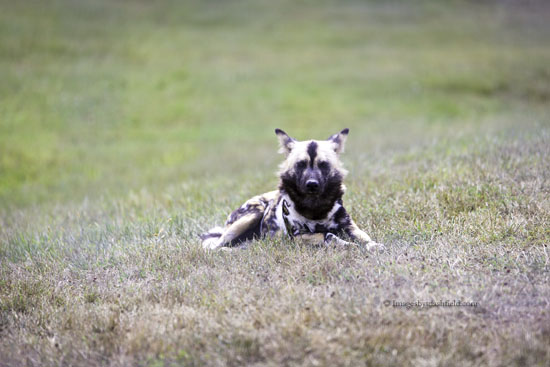