You never know who you are going to meet

Posted on March 19, 2018 by imagesbytdashfield

We had gone to the car show downtown (will be sharing that with you later) and while taking a photo of one vehicle outside of the main area I heard this voice say “Hey! take my photo too!”  It was this chipper gentleman smiling and playfully posing for me; we both just laughed and walked away.

As fate would have it, while in line to get our entry tickets I ended up standing next to him.  We struck up a conversation and I was taken by his winning smile and happy nature.  I noticed what he was wearing and mentioned that my brother served over there too.  He told me he did tours in ’67, ’68 and ’69.

I almost walked away to get in a shorter line for my ticket but turned and asked about taking his picture then.  He posed and that was the last I saw of him.   Unlike the many other times when I’ve taken someones picture while doing street photography, this chance encounter touched me.  Maybe it was because seeing him made me think about and miss my brother; I have no idea but there was just something in his face. 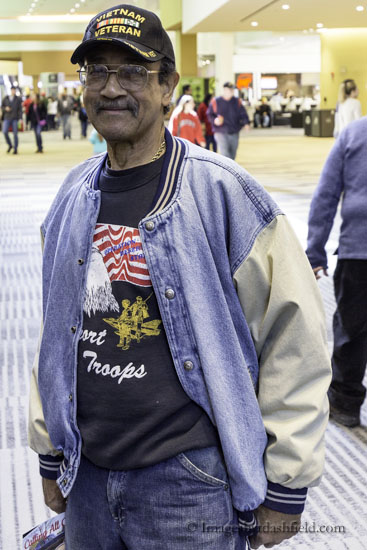