Posted on March 4, 2019 by imagesbytdashfield

Photography has come a long way since the first tintype photos were made.  Images have progressed from black and white to sepia to color and in some cases to colors that really don’t exist in nature.  We’ve all seen that photo that was so processed the colors were practically supernatural.

But I digress.  We all have options in how we capture and ultimately edit our photos.  There are some who are very much into film and all of their images are in black and white.  Others love their images to be in color be it bright and bold or soft and muted.  And then there are those, like me, who happily switch between the two.

I have found that there are some images that just won’t do unless they are in color, such as when I want to convey the warmth of a sunset for example.  Then there are images that just stand out in black and white because of the light, shadows, contrast or mood conveyed in the image like a dark and stormy night and someone walking alone in the rain.  It’s what you want your photo to convey that will probably be the reason for how you edit it.

Often I find myself editing an image in both color and black and white to see what the image will say to me.  Sometimes it’s the clear sound of color only and then there are images that say one thing to me in color and another in black and white; both having somewhat equal say in the matter; so to speak.

There is a camp that feels black and white film is what’s happening (again) and there is the camp that believes why go black and white when we have cameras (and phones) that can capture so many colors.  I personally believe in the validity of both camps and can we all just snap along happily.  The bottom line is – in my opinion – shoot and edit the way you want to create your image no matter if it’s color, black and white, sepia, infrared or whatever.

Since it’s monochrome Monday I am sharing this image I took while we were hiking in the Salt River in Arizona.  Wonder why they call it that?  I’ve walked beside rivers, gone fishing in them, tried to water ski in the Mississippi (epic fail) but I’ve never gone hiking in one.  It was an exciting first and I enjoyed it greatly. When I took this image my main goal was to catch the clouds above the mountains and the reflections in the river but it was when I was doing the editing in Lightroom that it whispered convert me to black and white.

Why?  Well believe it or not, besides the details in the mountains that came out better in monochrome and the clearer reflections in the water, when I saw this image as shown  I felt like I was watching an old black and white western.  Gunsmoke in the early days immediately came to mind; an old favorite of my parents.  Funny how memories work, huh?

So what camp are you in – color, black and white or whatever mood hits you?  Also, how do you edit your images if you make them black and white? Move sliders, presets and actions or your own secret sauce?  I used a Lightroom preset with some tweaking for this photo.

(Next…more from the hike here in Salt River and then those killer squirrels at Saguaro Lake.  Viscous little buggers!) 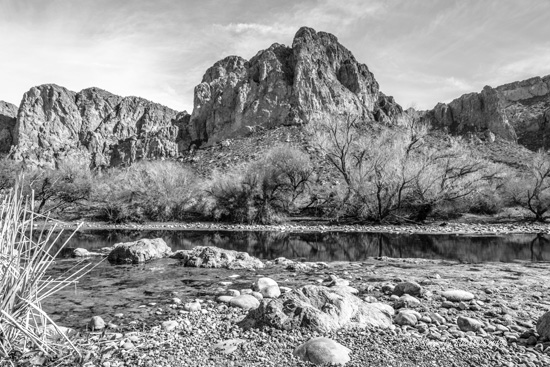 16 Responses to Colorific or Monochromatic