Posted on July 26, 2019 by imagesbytdashfield

This year has been quite busy here for us.  We welcomed 2019 in California and have since traveled to five other states.  Some of the trips were for work, some for fun and others to help family.  Those trips meant photos which began to add up.   No sooner than I thought I was close to finishing one series another would come up and the mass of waiting to be edited and posted images just grew.

Then when spring came around,  I was asked to photograph some events, there were some  photo club forays and you see where this is going… the pile grew!  Along with the mounds of files waiting for their turn to be edited, I have begun to run out of space in which to store these files.  Yet another item added to the to do/fix this list.   I try to tell myself that this is far better than being bored with nothing to do and occasionally I do give myself a chance to just exhale.  Like this week for instance.

This week I saw my life’s odometer turn to a new number and while I much much prefer the odometer to keep on turning, the number gave me a bit of pause.  So instead of bemoaning being “older” I decided to go out there and defy every norm that society has put in place for women over a certain age (notice I ain’t saying the number and you are well advised to guess low!  You’ve been warned!!!) After some initial trepidation and fighting off the voices in my head that were whispering “Oh dear! You shouldn’t (fill in the blank) at your age!”  I went out and had a great time!

I got quite a lot of “You go, girl!” and hugs and congratulations and compliments, etc. from those I knew and complete strangers while in the process of celebrating my life.  On the actual day of my birth, DH gave me a giant number which was just one of the numbers of my age and took me throughout Columbus and surrounding areas with it photographing me.

We went to a local park and I nervously at first, got on a swing and after telling that inner voice who was whispering the chain could break and you won’t bounce back like those little children over there (there is some validity to that fear as I still sport the scar on my lip from the chain breaking on an old swing set I had in my back yard when I was 8 – childhood trauma and all that!) I began to really enjoy being on a swing again.  I had forgotten just how much fun something so simple could be.

From there we just went from place to place, stopping at a few iconic spots in Columbus, me toting my balloon and wearing my It’s My Birthday! pin while having a grand time.  Below is just one photo from my birthday photo shoot.  I’m standing next to the buck statue I featured in the post here with part of the Columbus skyline in the background.

Hopefully I will catch up on some of the posting I’ve been promising but sometimes living life just grabs you and you go for a spin! 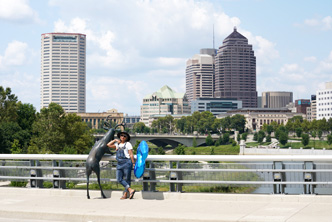