Posted on August 28, 2019 by imagesbytdashfield

Other than just getting into your vehicle and tossing a coin to determine which way to go, when deciding to go someplace there are usually reasons for the final destination and our trip to Colorado had a couple of reasons including one you would never guess in a million years.

After visiting Capitol Reef National Park this year, I got the bug for national park visiting (again) and guess what Colorado has? Rocky Mountain National Park!  We also wanted to go there because of the abundance of wildlife including moose.  I didn’t see any moose when we were in Maine at Acadia National Park so it was a big bucket list item and I have moose stories for you later!

The fact that we could get there on a direct flight from Columbus, Ohio helped a lot as well and once there the drive wouldn’t be too long or difficult – a bit nail biting in some cases but well worth it.  But there was one other reason that sealed the deal with visiting Colorado and it involved a DNA kit.  That caught your attention didn’t it?

By the time I was born most of the elders in the family had passed and there wasn’t a lot of history passed down so when I decided to take the DNA test to find out about my ancestry I wasn’t sure of what to expect.  The day I opened the results in the email I got my answers and quite a few more questions but back to how this relates to Colorado.

The moment I opened my results and said “Well! Did not see that one coming!” I got pinged by someone who lived in Colorado (tah dah) who asked me how were we related.  My answer was “Hell if I know I just opened the thing.” Long story short(ish) is that she is a 2nd cousin and we share the same set of paternal great grandparents.  She has since shared with me information about that side of the family I knew nothing about and we’ve been communicating ever since.

When I told her we were coming to Colorado she was thrilled to finally meet, as was I, and we had a grand time being taken around parts of Colorado with my tour guide cousin before we headed off to the national park.

On our first day in Boulder, Colorado (to acclimate to the higher elevation before heading off to the even higher elevations in Rocky Mountain) we went to Eldorado Canyon State Park for a picnic and to take in our first sights of Colorado’s beautiful nature and landscapes. 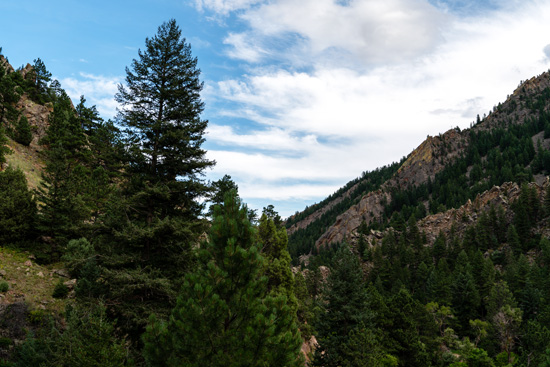 I’m pretty sure these are wild blueberries I saw on my first (and very short) hike… I think. 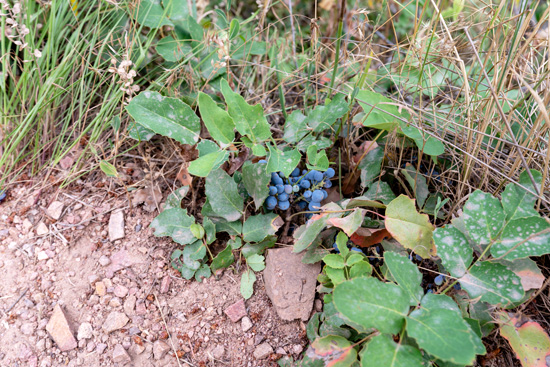 It was in the park that I saw the first of the many mountain streams I would come upon (and get in) throughout our trip. 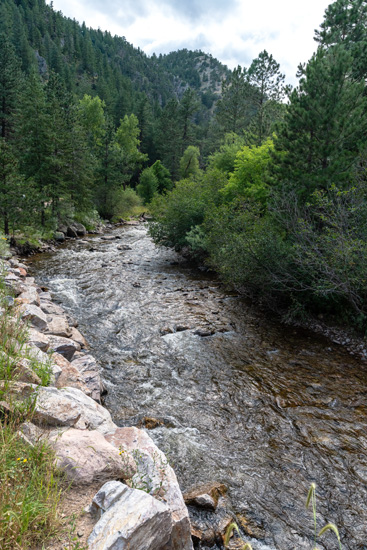 You can’t see it here but on the far right there is a guy hanging off the mountain either making his way up or down.  Will share the climbers with you in the next post. 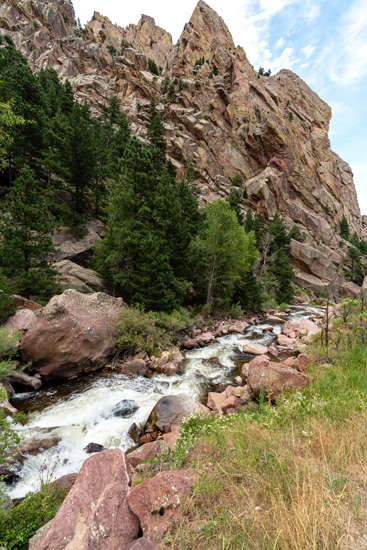 DH and cousin heading back to the car as I huffed and puffed behind them from my first go at hiking in Colorado; they stayed on level ground while I attempted to go up a trail. Flat hiking, even at a higher elevation, was not the issue.  It was when walking up an incline, steps or over rocky terrain that my flat lander lungs and heart strained! Here in this part of the park the elevation was around 5800 feet which is a far cry from the 938 feet where I live. 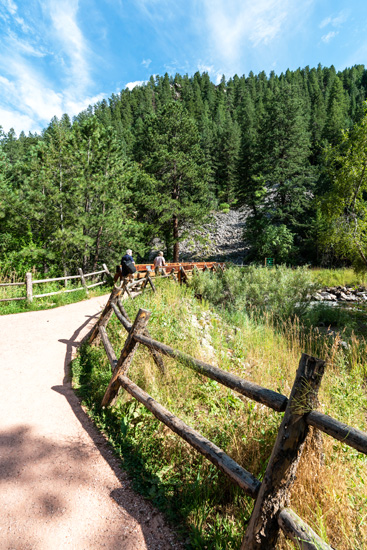 Next time: Those wild and crazy rock climbers!

7 Responses to Why Colorado?