In search of Bullwinkle

Posted on September 4, 2019 by imagesbytdashfield

I know I said the next post would be about rock climbers but I have to do a bit of a post shuffle here and try for the rock climbers next time.  Instead, today we have a tale of two (actually more than two) moose.  One of the things on my national park bucket list was to see and photograph some wild animals that I’ve never seen before and at the top of that list were moose!

On our second day in Colorado my cousin picked us up and off we went on the Peak to Peak Highway towards Brainard Lake and other parts.  She had heard that some people had occasionally seen moose in the area and if we were lucky (and left early enough; they tend to show up very early or much later in the day) we could possibly catch a glimpse of one.

As we were winding our way to the lake guess who was grazing right by the side of the road?  A female moose all alone.  We pulled over, opened the sun roof and I popped out of it to take this photo. 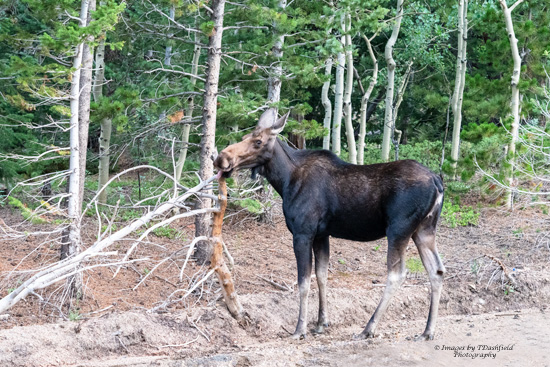 After much glad handing one another we drove off towards the lake thinking we had seen a moose and that would probably be it.  Oh how wrong we were!  As we entered the lake area we noticed several cars pulled over on the side of the road with people standing around with all manner of photographic gear from mobile phones up to 600 mm lens on dslr’s.  I was armed with my 100-400 mm lens so I was raring to go!  This was our first, but far from last, encounter with the “If cars are pulled over then there must be something good to see and photograph!” effect.

We had really hit the moose jackpot as grazing relatively close to us were at least six bull moose all together.  It was fantastic and just a bit frightening as moose are very very large creatures especially this one I called Big Boy.  The rack on him was enormous!

Big Boy wasn’t the most cooperative of moose as he would either have his back to me like here where you can see the size of his antlers.  They must have incredibly strong neck muscles to handle all of that. 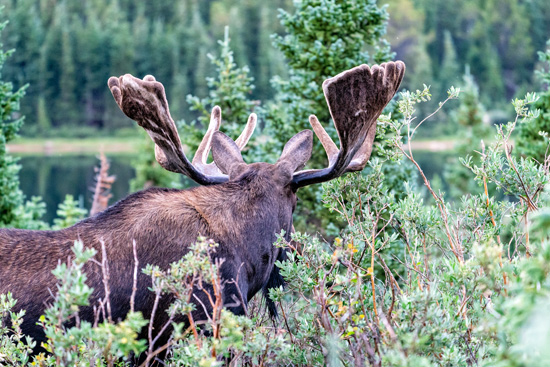 Or he’d turn back but would hide his face partially by the shrubs and trees; I am positive that he was taunting me. 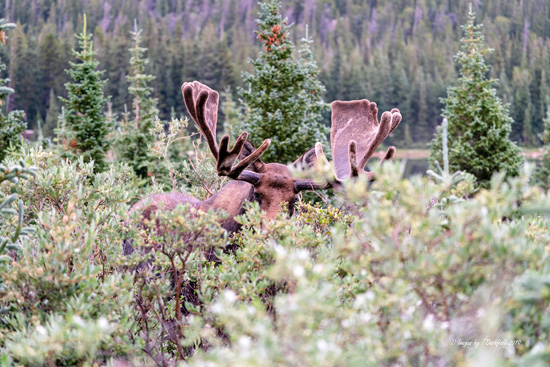 The moose didn’t appear to be afraid of humans as long as we had enough sense to keep at a safe distance (PLEASE! Don’t ever try to take a moose selfie!!!) but we all observed that they did not like dogs.  A person was walking their dog on the road and one of the moose got startled.  A startled moose is a scary thing to see! 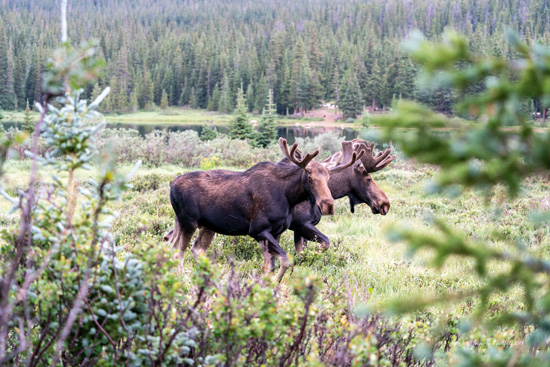 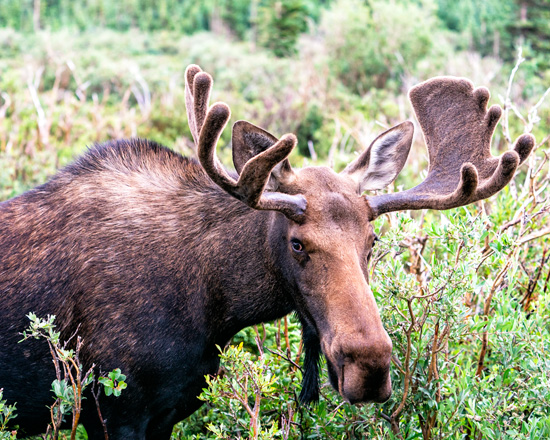 But after awhile the moose had had enough of the paparazzi and decided to cross the road and head off deep into the woods as all of us humans snapped away.

Interesting thing, when we were in Rocky Mountain National Park we only saw two moose with one being very far away and the other one sedated as the park rangers were putting a collar on a female.  As I spoke to other travelers in the park who were lamenting about wanting to see a moose but not having done so I had to smile and tell them about our moose-a-palooza by the lake.

One photographer I was chatting with did say he saw a bear near his campground, a critter we did not see.  What has been your favorite wild animal you’ve ever encountered?  Before the moose mine was snorkeling with sea turtles in Barbados.  It’s still the sea turtles but now they are closely followed by my close encounter of the moose kind.

Fine art photographer who loves to see and capture the amazing things in this world. Owner of Images by TDashfield photography. www.imagesbytdashfield.com
View all posts by imagesbytdashfield →
This entry was posted in Nature, photography, Travel Photography and tagged Brainard Lake, Colorado, moose, nature photography, road trip, wildlife. Bookmark the permalink.

20 Responses to In search of Bullwinkle