Posted on December 20, 2020 by imagesbytdashfield

I didn’t think we’d have a chance of photographing anything today as it was very cloudy and threatening rain all day.  Then the weather started to taunt us with patches of light and blue sky before retreating to gloomy and grey.  So I figured tonight was going to be a wash.

The sun had gone down and at first I wasn’t going to look outside only to be disappointed but I went ahead and looked out the window and saw the moon; it had gotten a bit “wider” in two days.  Perhaps things were looking up for my chance at photographing the planets? 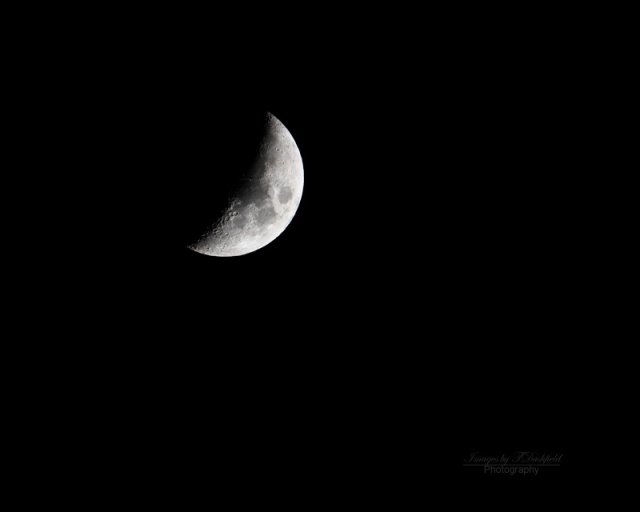 I couldn’t see Jupiter and Saturn so I had to throw on some shoes and my coat and step outside and there they were!  We then scrambled to get cameras, tripods, flashlights and settings on and out into the back yard we went.  You can see here just how low in the sky they sit.  I had to move around in our yard in order to get them in between the power lines.

There was a lot of shutter clicks going on until the clouds came back in and we decided to wait in case they moved.  It’s a good thing we did because the clouds did pass just as the planets were getting even lower in the sky and I was able to capture some of the moons of Jupiter this time!  At first I thought my shutter was open too long and that was why Saturn looked a bit oval shaped and then DH told me it was because of its rings that it looks that shape.  Ah hah…

I decided to give the moons of Jupiter another edit (and closer crop) so that you can hopefully see the moons better.  On my computer screen I can see five of them but once imported into WP the fainter fifth moon fades out.

The 21st is when the planets are supposed to be their closest (the Christmas star effect) but Mother Nature has been a bit fickle.  We shall see!

20 Responses to Moon still waxing and conjunction getting closer