Posted on December 9, 2011 by imagesbytdashfield

As I was saying, this place is huge!  You can walk for hours and thankfully there are benches here and there where a weary observer of nature can sit and contemplate the meaning and purpose of desert life.  I have to correct myself on an error I made yesterday about cameras.  There were 5 adults and one child.  Child had camera, FIL and I had our DSLR’s, and sister in law and her brother (DH) had pocket cameras.  DH took some shots with our little Canon which is what we use when going somewhere where the big gun would be too big to carry.  So it was snapapalooza going on all around with the family.

I made very sure that when I backed up to get a shot I did not back into anything.  Plus, the sun would be directly overhead and make for difficult shots (had nothing with me to help with that) so there were times when a shot would’ve been so much better but it was impossible to move anywhere or it would  have involved me standing in a danger zone.  That would not have been pleasant!  I will admit I had my childish moments of wanting to touch a needle to see just how sharp it was; thankfully the adult in me said don’t be such a dork!  Here are a few more of the spiny rascals… The last round one with the yellow top is called a golden barrel.  It fascinated me how each species had it’s own arrangement of needles: short, long, curved, thick, thin.  A few made me think that they had put their little roots into an electrical socket; needles were just going every which way.  And as you can see from the one in the middle, not all cacti are green. 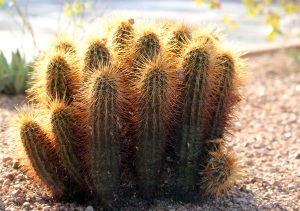 There were also some flowers in the garden, the only ones I can recall are desert marigolds (which do not resemble any marigolds I’m used to) and blanket flowers.  There were signs next to the plants telling you all of the scientific stuff about them as well as their place of origin and blooming times.  Throughout the park to educate you about your surrounding, along with the usual suspects of helpful volunteers telling you what medicinal uses the Native Americans had for so and so plant, there were also little flip books to teach you about the plants and animals.   Some of those books tried to stir up long ago misfiled lessons taught to me in elementary and high school.  Tried being the key word here as some of those guesses of mine weren’t too sharp, but I did remember clearly how candy is made from the prickly pear (and I recall VERY clearly it was yucky) and how a cactus expands and contracts depending on how much water it is storing.  The yellow flower here is the desert marigold and the yellow and red are the blanket flowers. 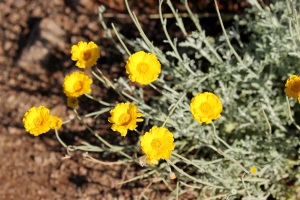 Now this one flower just had me grinning making all sorts of jokes about it.  It is called a Fairy Duster.  Beautiful little puffballs that bees and hummingbirds loved; so very soft to the touch.  What I wanted to know was this (and it made DH shake his head at me from the questions and bad jokes) why is it called a Fairy Duster? Are fairies dusted with it or do they use them to do their dusting?  Seen any dusty fairies lately?  No fairies were fluttering about – unless they were disguised as hummingbirds – so I may never know the answer.

Next time – The big guys and the little animals!