Throwback Thursday – The Chronicles of Cheese

Posted on September 4, 2014 by imagesbytdashfield

For throwback Thursday I take you back to a post I did in September of 2011.  It was my first trip across the pond to visit England and some of DH’s kin.  It was a fantastic trip and I do hope we get to return soon.  There are some yummy things I just can’t get over here that I miss and next time I’d love to explore more of the country side.  DH told me about a fish and chip place somewhere in Bristol where his father was born that sounded tasty.  Mmmmmm fish and chips, curry, scones with clotted cream…I’m getting hungry.  Oh! Since I first posted this I have had many ploughman’s lunches and now keep a jar of Branston’s pickles in the house 🙂

The Chronicles of Cheese!  Ok, I like cheese as much as the next person and it’s only been in recent years that I’ve branched out beyond yellow cheddar, colby, pepper jack, and blue.  Brie and feta and Gorgonzola ain’t too shabby either!  But I’m your basic yellow cheese kind of girl.  I will not touch the floppy disk wrapped in cellophane called American cheese though.  Anyway……I married a man who really likes cheese and something called a Ploughman’s Lunch.  Huh???  Yet another British thing I have sorta kinda learned about.  That means he has explained it to me but to date I have not experienced one.  I stopped at the scone and clotted cream and hard cider aisle and pretty much parked there.

To him a good cheddar is really sharp and is not yellow.  Really?  I always thought if it was yellow then it must be cheddar.  But I digress, this Ploughman’s Lunch  consists of  meat, bread, butter, pickle (Branston pickles which is a relish and not really a pickle – go fig!), and – tah dah – cheese!  While discussing what makes a good one of these lunches one day he mentions a specific kind of cheese I had never heard of before in my life….Stilton.

He waxed poetic about the joy of a good piece of Stilton and how you can’t get any good Stilton in the states.  Me being me, I was determined that there must be some of it somewhere in one of these specialty food stores.  Bugger was really hard to find until we stumbled upon some at a wine shop I used to go to.  Bought a plug of it with some water crackers and went home to see what this stuff was all about.

Can you say major fail?  That stuff was hideous! It hurt every last taste bud I had.  He didn’t like it either and summarily pitched the rest of it in the trash.  I was told that what we had was not good Stilton – well duh – and that what he had in England was the business!  It was put on our list of things to do when we went there. A friend and some online reviews raved about this one cheese shop in Covent Garden called Neal’s Yard.  Being that it is in the Covent Garden area I assumed tourist trap probably  but we had to go…and go we did.

I can honestly say it was a new experience for me.  I have never been in a cheese shop like that ever.  No wait! I have never been in a true cheese shop before until this place (the big cheese section at the local market place doesn’t count).  It was amazing and I wish that I had gotten a chunk of cheese and some of those oat biscuits they were selling, or even some of the bread.  Unfortunately we found the place very near to closing time so it was a quick in and out.  But while there I asked for a sample of Stilton and know what?  It was good!  Nothing like that mess we bought state side.  It put me in mind of a not quite as creamy or soft blue cheese but with a tiny bit more punch. 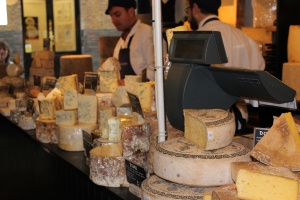 Guess I will have to try some of that other strange named cheese – have no idea what any of those are – when we go back.  Next episode:  Interesting food – England part 3 or how we went to a foo foo restaurant and I nearly squirted DH’s Aunt with a quail egg!

10 Responses to Throwback Thursday – The Chronicles of Cheese